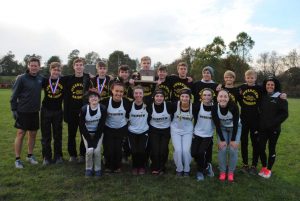 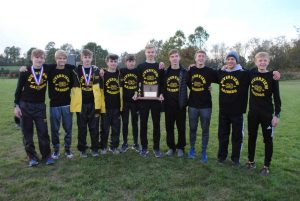 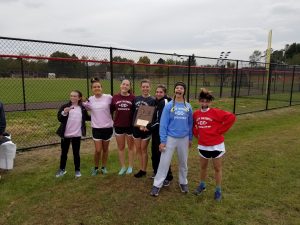 Congratulations to the Girls Cross country for qualifying the 2018 State Cross country Championships.  The girls finished 4th out of 40 schools and were led by Marina Pietz,  17thand Ali Johnson, 31st –  who both met the individual state qualifying standard.  The girls qualifying performance included a dramatic comeback.  The team was in 9th place after the 1st mile but strong efforts in the 2nd mile hills by Mikeala Collins, Hann Morrisey, Meredith Kocur, Gill Gaynor and Izzy Komaniak improved their team score by 66 places putting them in contention to win the last state spot.
Congratulations also to the Boys Cross country team for a dominating 2nd place performance at the WPIAL championship.  The Boys finished with a total of 81 points, finishing 2nd to Winchester Thurston, the 2nd ranked team in the state and finishing 98 points ahead of the other 2 state qualifying teams.  The Raiders’ top 5 of Mason Ochs, Gid Deasy, Lucas Wilton, Noah Black and Jacob Sullivan all met the individual state qualifying standard with Aidan Sebastian and Ben Swensen just slightly behind.  Mason, 4th and Gideon 9th became the 10th and 11th boy runners in Riverview school history to finish in the top 10 at the WPIAL championship.
Good luck to both Raider squads as they compete next weekend in Hershey!

No Events This Week

Events are added by athletic staff.
View All Events